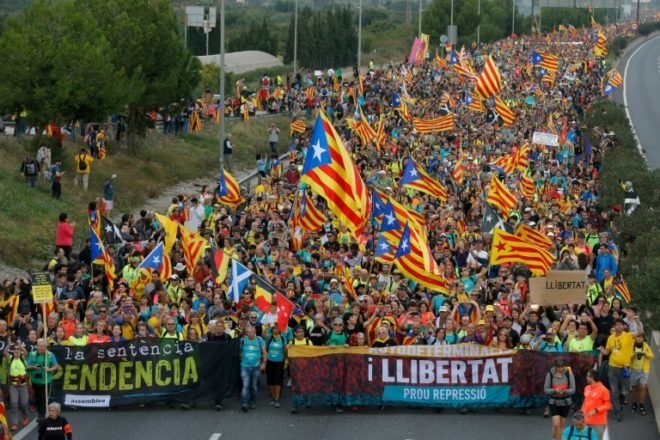 For the socialist Catalan republic and political prisoners freedom!

The judgement of the trial-farce against the referendum of October 1 marks a before and an after in Catalan and Spanish state political situation. With it, the Spanish bourgeoise pursues a double objective: to crush the will of the majority of the Catalan people by denying their right of self-determination, and to prevent the struggle for the republic from spreading. A few weeks before the November 10 elections, the Catalan national question once again becomes the main protagonist of the political situation.

he Spanish bourgeoisie is well aware of the unpresentable of the Supreme's sentence and prepares to face a massive response in the streets. That is why the arrests of nine CDR activists, accused of terrorism, are not accidental. They are part of a well-defined strategy to hide the peaceful and massive nature of the movement for the Catalan Republic, and prepare the ground for more repression.

In this new twist, the campaign slogan chosen by the PSOE is not coincidental, “Now Government! Now Spain!” Pedro Sánchez's choice cannot be more crystalline: as he did when he supported Rajoy in the application of Article 155, he encourages Spanish nationalism to obtain gains in the most conservative electoral base and makes clear his complete subordination to factual powers.

Nobody ignores the interconnection between the Catalan events and the movements that occur at the highest levels of the State. With a world economy moving towards recession, the Spanish and Catalan bourgeoisie prepares new and brutal cuts that will hit millions of workers and the impoverished sectors of the middle classes. In this context, the example represented by the continuity of the mobilization in Catalonia constitutes a real danger of destabilization and resistance to its plans.

On October 1, 2017, more than two million votes legitimized a referendum in favor of the republic and self-determination, opening a revolutionary crisis in Catalonia. Two days later, on October 3, a general strike paralyzed all economic and social activity and filled hundreds of Catalan cities and towns with millions of protesters. The images of the exemplary and peaceful resistance of those days traveled the world.

In a sequence of events that is only comparable to the events of April 1931, the direct action of the population made the violent deployment of thousands of policemen and Spanish civil guards, with their indiscriminate blows and the confiscation of thousands of ballot boxes, sterile. But most importantly, it was shown that the State apparatus is powerless when the masses decide to take charge of their own destiny.

In response to this crisis, the Spanish ruling class ― with the decided support of Catalan big business ― resorted to the suppression of regional autonomy through Article 155 of the Spanish Constitution, to political imprisonment under the accusation of military mutiny, to the exile of leaders and activists, to persecution and criminalization... trying to make millions give up and renounce the republic. But they have not succeeded. It is impossible to find, in recent European history, such a prolonged mass movement that mobilizes so many millions of people on the streets and at the polls year after year.

The problem, for the Spanish and Catalan bourgeoisie, is that the factors that have led to this political crisis and that affect the stability of the regime of 78, not only remain, but are exacerbated.

With the repression of the Catalan people, the authoritarian tendency that guarantees the national unity imposed by the Franco dictatorship and its political heirs is consolidated, and tomorrow will be used even harder against any social movement, trade-union and organization that is not willing to accept the policy of the capitalist governments.

This is one of the reasons why the policy of the leaders of Unidas Podemos (UP) in this area is so criminal. Since the outbreak of the revolutionary crisis in 2017, Pablo Iglesias, Alberto Garzón and many others, together with the leaders of CCOO and UGT, turned their backs on this wonderful movement. Instead of extending solidarity with the Catalan people and promoting mobilization for the republic in all the territories, reinforcing its class content and thus unify the response against the common enemy ― the monarchy, the bosses, the regime of 78 and all its representatives ― adopted a cynical and equidistant position between the people of Catalonia, beaten for organizing a democratic vote, and the block of Article 155, which raised the flag of the most rancid Spanish nationalism and repression in all its possible forms.

The struggle of millions of people for the right to self-determination and the republic has been denounced by numerous “progressive” intellectuals and left-wing politicians who even declare themselves “republicans” and “communists”, as a reactionary movement led by Catalan elites. But the truth is that the Catalan bourgeoisie not only has not promoted independence and the republic, but has firmly positioned itself against it, allying with the Spanish bourgeoisie and playing a fundamental role in the repression and the fear campaign (it is enough to recall the hundreds of companies that left Catalonia immediately after October 1).

The experience of these two years has shown that the abandonment of a class and internationalist position on the national question converts itself into a complete renunciation to defend democratic rights. What we have seen in the negotiations for the failed coalition government between Unidas Podemos and the PSOE is conclusive. Pablo Iglesias accepted Sánchez's requirement to expressly renounce the right to self-determination and any criticism to the regime of 78. He even stated in an interview that if they were part of the government and the PSOE applied Article 155, they would abide by it without questioning: a clear example of their political bankruptcy and the abandonment of the programme that led them to become the reference party of the fighting left, also among historical nationalities.

Today, despite the brutal slander campaign against Catalonia, state-level polls reveal that the majority opposes repression, compared to those who support a new 155. It is a good indication that confirms the potential that exists to win over broad sectors of the population to the struggle for a socialist republic, including not only the voters of En Comun and UP, but also many socialist voters. Potential that until now the leaders of UP have spoiled, paving the way for the campaign of the reaction, which aims to sow the poison of division between the Catalan working class and youth and that of the rest of the State.

The general elections of April 28, as well as the local and European elections of May 26, were a new confirmation of the deep feeling of rupture with the regime of 78 that millions of people in Catalonia have. The reactionary bloc (Vox, PP, Cs) received a very hard blow: they did not reach 15% of the votes together. For the first time since 1977, the most voted force in the general and local elections was a party that declared itself pro-independence and left-wing such as ERC.

However, supporting ERC had nothing to do with putting the fight for the republic on hold. Esquerra snatched from Junts per-Catalunya tens of thousands of voters who want a Catalan republic with left-wing policies and doubled, and even tripled, their support in the working class areas with respect to previous elections, also picking up the discomfort of tens of thousands towards En Comun and Podemos, disappointed with their councils policies and the rejection of the Catalan republic by their leaders.
However, the policy of ERC’s leadership is being the opposite of what their voters expected: abandonment of the October 1 mandate and mobilization for the republic, to instead apply new cuts and privatizations. Both the law pushed through by the vice-president Pere Aragonés as well as the measures of the education Conseller Francesc Bargalló (both of ERC) have already caused a major upset in their social base.

The whole approach of the leadership of ERC stems from the idea that there is an insufficient correlation of forces to carry out the republic, which would force a “negotiated” exit with the State and the resignation of what October 1 means. But this scheme, in addition to false, represents a huge danger for the movement. It only benefits the Catalan right who wants to send people back home and return to the autonomy and negotiation with the Spanish bourgeoisie, to abort a movement that, not only didn’t accept repression, as it would never settle for a republic led by the old oligarchy.

In the Catalan national liberation movement there is a growing clash between the hundreds of thousands of young people, workers and broad sectors of the middle classes that want to take the struggle for a republic to the end, break with the oppression of the centralist State and make the social transformation of Catalonia a reality, and those dilatory tactics of the Catalan right that, although in a complete minority at the base of the movement, have a decisive weight in the Government.

This contradiction was revealed during the last year in the hissings to Torra or the demands of resignation to the Interior Conseller Buch for the repression of different anti-fascist and independentist demonstrations. Recently, it has been expressed again in the decision of the Department of Interior to authorize the Mossos (Catalan Police) to use pepper gas against the protesters. During the last months this malaise has grown reflecting itself in numerous criticisms of the ANC’s territorial assemblies and the actions of the CDRs, or in the decision that the leaders of the Government parties were not at the head of the Diada demonstration.

We must draw the lessons from the experience of these years. The response to the Supreme Court's ruling cannot be limited to an isolated general strike. It is necessary that the entire combative left, the CDRs, the trade-unions that have positioned themselves in favor of the republic, and all social movements raise a plan of action prolonged in time, with a clear calendar of general strikes, occupations of workplaces and study centers and demonstrations, able to generate the massive support of the population.
Achieving a resistance movement of this magnitude requires making it clear that we fight for a socialist republic that nationalizes the fundamental levers of the economy, the banks and big monopolies, that puts an end to the nightmare of social cuts and the lack of public and affordable housing, of precariousness and miserable wages, of sexist violence and the destruction of the environment. In this way we would establish a bridge to overcome the borders of Catalonia and unify our struggle with that of the workers and youth of the rest of the territories, creating the best conditions to face and overcome repression.

Hundreds of thousands of people in Catalonia are fed up with words and promises that never come true and of jugs of cold water. In this context of criticism, the CUP's decision to stand for the November 10 elections represents a great opportunity to break ties with the Catalan bourgeoisie and with any type of collaboration with the Government’s policy of cuts and demobilization. The CUP has a new opportunity to occupy this growing space on the left and play a role in advancing the struggle for the Catalan republic of the workers and the people. But it is essential to draw conclusions from the mistakes that have led them to lose support and influence in the last period, despite the combativeness of their militants.
The rank and file demand a clear strategy to face State repression and make the republic a reality. The fundamental factor that prevents it is the decisive weight in the leadership of the movement of the sectors who accept capitalism as the only possible system and reject to unite national liberation with the socialist transformation of society. To overcome this obstacle we need more than the will to fight, we must consciously act to build a party of the working class and the youth that raises such a revolutionary and internationalist programme. 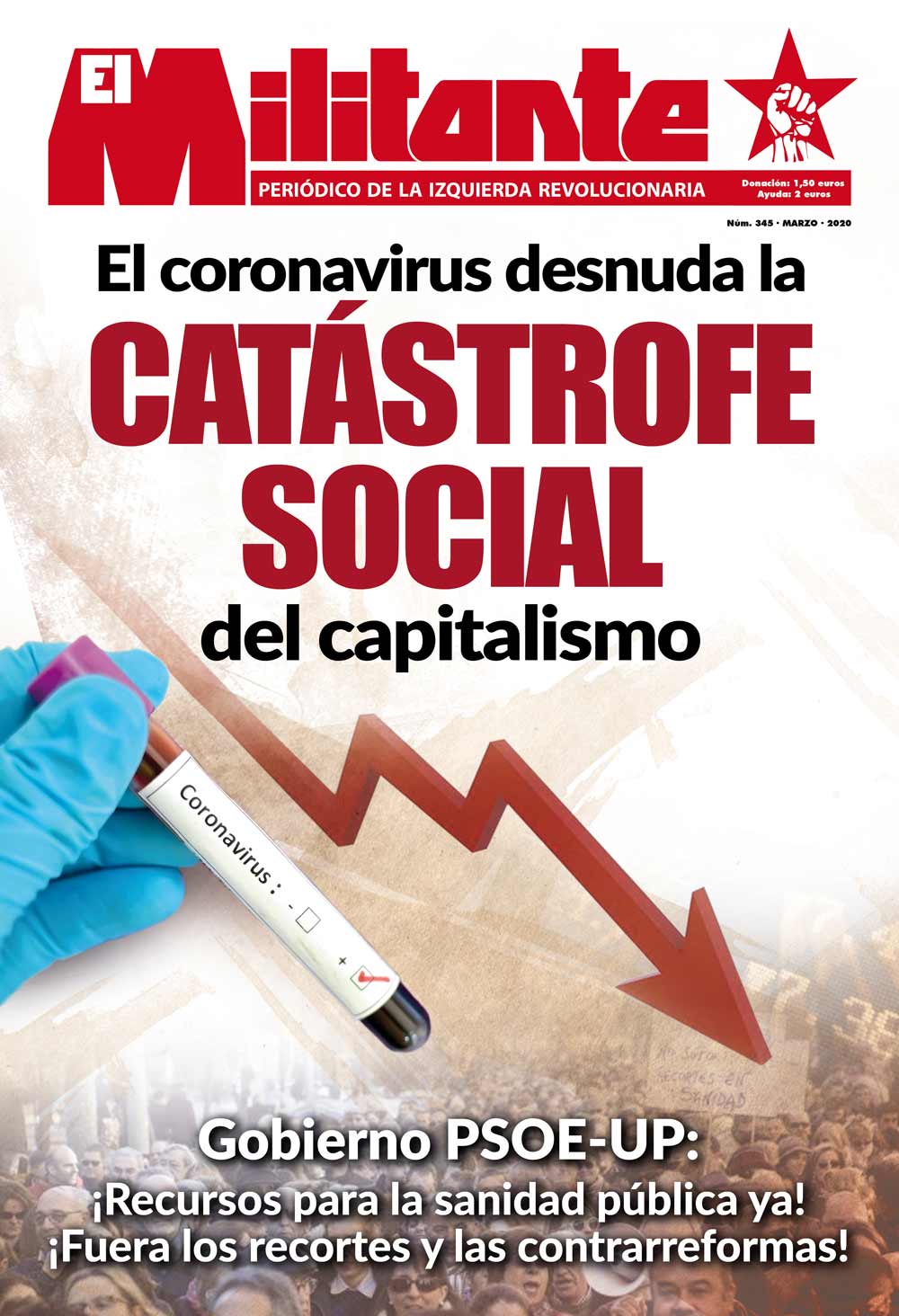