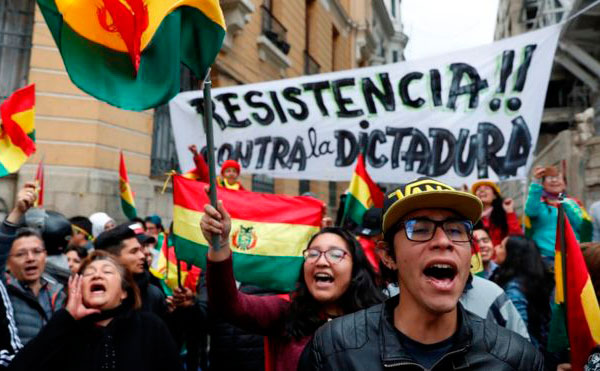 All the power to the workers and the people!

Bolivia is experiencing a raging counterrevolutionary attack. The putschist offensive orchestrated by the right and the Bolivian ultra-right with the support of US imperialism on Monday, November 11, secured the resignation of President Evo Morales, Vice President Álvaro García Linera and a good number of ministers and public offices of the Movement To Socialism (MAS ), the party that has governed the country for 13 years.

After this resignation, the leaders of the right-wing opposition: Carlos Mesa and Luis Fernando Camacho, have started different movements to try to form a new government based on a military coup. At the same time, in different parts of the country, such as the capital La Paz or El Alto (the city that initiated the insurrections of 2003 and 2005), farmers and miners have started rejecting the coup and refusing to accept an oligarchic and right-wing regime.

We in the Revolutionary Left denounce this coup and state our solidarity by calling on the Bolivian youth, workers, and peasants to maintain the struggle, to extend resistance and mobilize massively. You have all our support, comrades! They shall not pass!

At the same time, young people and workers from the rest of the world must mobilize in support of our Bolivian brothers and sisters, organizing solidarity actions as tens of thousands have already done in Latin America.

Neither "democratic opponents" nor "civic committees”, they are fascists and murderers at the service of the rich

Morales's resignation has been preceded by twenty days of opposition mobilizations that culminated on November 10 with a pronouncement by the military leadership demanding him to resign. What the media presents as a "civic" protest movement in defence of democracy and "clean elections" is really a carefully prepared coup d'etat. Just look at the curriculum of the leaders of this self-styled "civic movement" to know what we are talking about.

Carlos Mesa, a right-wing candidate who competed with Morales in the October 20 elections and denounced fraud when the Bolivian electoral power proclaimed Evo Morales the winner in the first round, was a minister of the government of Gonzalo Sánchez de Lozada. The government of which Mesa was part was responsible for the antisocial measures and the brutal repression — which caused 68 dead and 400 wounded — that culminated in the popular insurrection of 2003 that brought down Lozada. Mesa then appointed interim president until 2005, applied more antipopular policies that led to a new uprising of workers and the people in 2005 which forced him to resign.

Luis Fernando Camacho is the leader of the so-called "civic committees", a name in which authentic fascist gangs are hidden in the service of the oligarchy of Santa Cruz — second city in the country — which are mainly made up of middle-class youth and underclass sectors that have tried to take control of parts of this and other cities at gunpoint. Camacho, a businessman known for his Christian religious fundamentalism, boasts of his racist disregard for indigenous peoples.

Why has the government of Evo Morales fallen?

Evo Morales was brought to power in the 2006 elections thanks to the insurrections of 2003 and 2005. The Bolivian masses participated in the front line of the continental revolutionary ascent process that shook Latin America, making clear their determination to transform society. The application of different reforms and measures in favour of the poorest allowed the MAS to gain massive support in the following electoral calls. But, at the same time, the opportunity to use all that powerful force to end the power of the oligarchs and build a genuinely socialist society, in which all power was in the hands of the workers and the people, was wasted. Morales' governments chose to respect the limits of capitalism, even seeking alliances with sectors of the Bolivian bourgeoisie.

As has been demonstrated in recent weeks, the Bolivian capitalists had not become democrats or sensitive to the needs of the people but were waiting for favourable conditions to crush the masses who had dared to challenge their power. While the time came to unleash the revenge of the counterrevolution, in order to maintain its benefits and demoralize the social base of the revolution, they demanded that MAS governments apply measures contrary to the interests of working families.

In recent years, the governments presided by Morales have signed agreements with sectors of the bourgeoisie and multinationals that provoked labour and popular conflicts, which were severely repressed. This turn to the right was completed with the strengthening of the bureaucratic control of mass organizations such as the Central Obrera Boliviana (COB), the country's main union that led the insurrections of 2003 and 2005. Evo Morales and the leaders of the MAS have even supported bourgeois right-wing politicians for various positions, mayors and regional governments claiming that it was an “intelligent alliance policy”.

The consequences of this alliance policy with native and foreign exploiters are the sowing of demoralization in sectors of the masses, reducing social support for Morales. As soon as the Bolivian bourgeoisie and imperialism have noticed this change in mood, they have gone on the offensive to regain control of the "Burnt Palace", the seat of the Bolivian government. The concessions, offers of dialogue and even the commitment to call new elections by Morales during the last days, have been answered by redoubling the manoeuvres and violence to dislodge him from power.

As expected, all those supposed right-wing allies that supported MAS leaders at different times are today among the promoters of the coup. Like the high official of the army, to whom the leaders of the MAS thought to have satisfied with favours and positions in different companies and institutions of the State. Also, a sector of the most bureaucratic leaders of the COB, to which Morales and the MAS gave their support to isolate the left-wing trade union sectors, supports the counter-revolution by keeping their arms crossed while the military leadership makes a coup d'etat. One of these leaders went as far as to state that if Evo Morales's departure was necessary to pacify the country, then Morales should resign. We are facing a tragic demonstration of the consequences of reformist and bureaucratic policies.

Organize an indefinite general strike until the defeat of the coup!

But this radiography would be incomplete if we did not highlight the powerful instinct and revolutionary will of the Bolivian masses. In spite of all the obstacles, of the lack of a serious plan of the leaders of the MAS to face the coup, a response from below is being produced. According to different information, thousands of peasants mobilized in El Alto from different regions shouting "Now yes, the civil war begins!". The Executive Committee of the Single Trade Union Confederation of Peasant Workers of Bolivia (CSUTCB) has given Camacho and his fascist dogs 48 hours to leave La Paz and announced that they will surround the city if necessary. The rank and file militants of the MAS are demanding Morales — who, according to the latest information, is preparing to leave the country for Mexico — not to accept exile and to lead the fight against the coup.

The coup of the right and imperialism has indeed come very far in Bolivia, but the enormous revolutionary flow of the working class and the peasants, which has already defeated previous counterrevolutionary attempts, is also a reality. Today, more than ever, we must remember the revolutionary victory over the coup against Hugo Chávez in 2002 in Venezuela. At that time, however, there was a big difference: Chávez never publicly resigned, and as soon as his letter refusing to resign was known, popular anger broke out and the people united against the coup in a matter of a few hours. The refusal of Morales and the leaders of the MAS to lead the fight, as well as the bureaucratic position of the leaders of the COB, are the main factor that prevents, for the time being, the growing rejection of the coup from becoming unified, generalized and endowed of a plan.

The counterrevolution is defeated with revolution

The next hours will be decisive. The main task of the Bolivian revolutionaries, of the most combative sectors of the COB, of the trade union and peasant movement, is to promote assemblies that form resistance committees in each neighbourhood and workplace and that coordinate them at local, regional and national levels. These committees must have the task of armed self-defence against the coup and organize the continued general strike to crush it. In addition, they must implement all the workers' and popular demands that have been demanded to the MAS government for years. To defeat the oligarchy, the military leadership, and the imperialists, the revolutionary committees of poor workers and peasants must take the banks, the big companies, and the lands and put them under their democratic control.

This plan, together with a programme of transition to socialism that proposes the expropriation of banks, land and major companies to democratically plan the economy, would allow not only those who are already looking for a way to resist against the coup d'état to join the fight, but also workers, peasants and young people who, unhappy with the policies of MAS, are sceptical, paralyzed or confused. This revolutionary policy is also the only way to divide the army and police into class lines and win their base.

The events in Bolivia prove that the bureaucratic leadership of MAS cannot be trusted to defeat the coup and transform society. Much less still can the bourgeois State at the service of the oligarchy and imperialism. That State must be destroyed and replaced by a genuine workers' and revolutionary government made up of revocable delegates democratically elected by the workers, the peasants and all the oppressed to put all the wealth of the country at the service of the needs of the majority.

There is no time to lose!

General strike now and action committees in each neighbourhood and workplace to organize and defeat the coup! 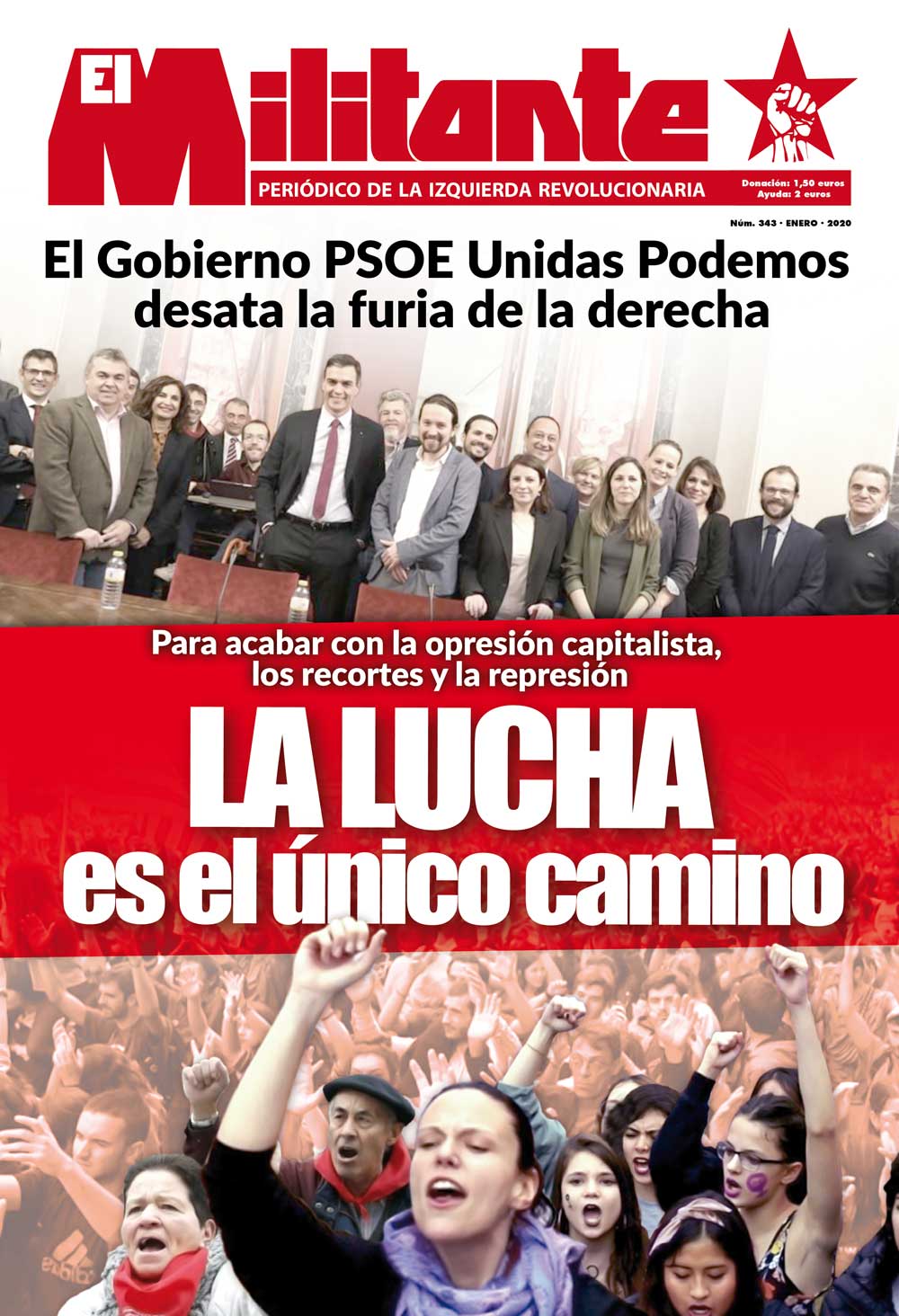